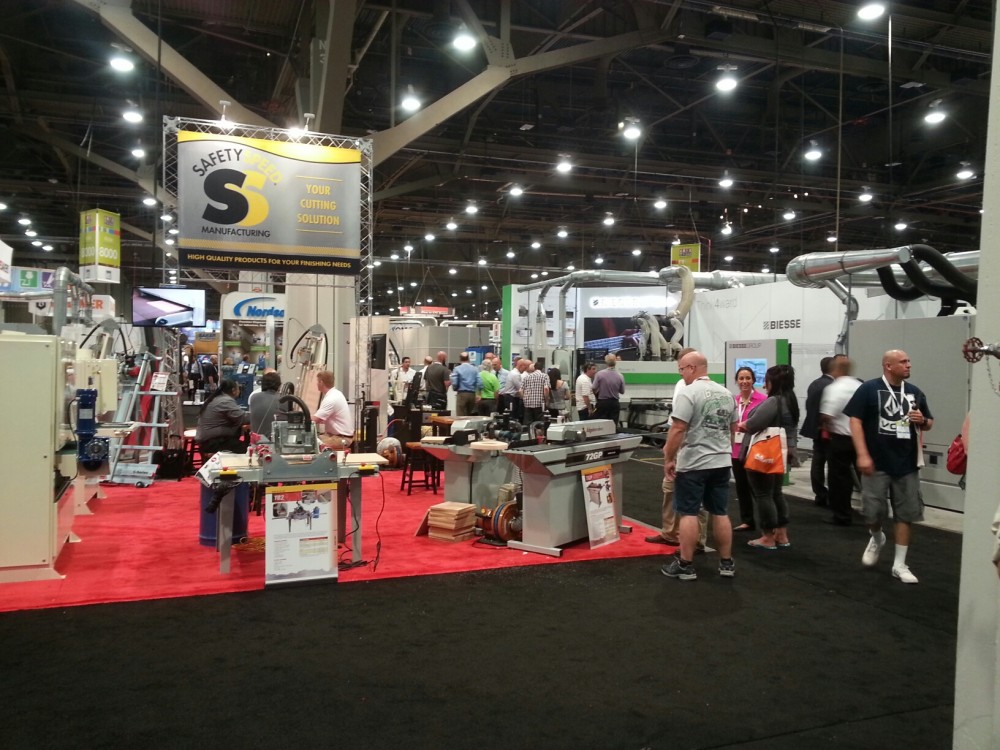 They came. They showed. They sold machinery.

The 2015 edition of the AWFS Fair in Las Vegas proved to be very good for Safety Speed Manufacturing.

Even as the sawdust still settles on the four-day event held July 22-25 at the Las Vegas Convention Center, Safety Speed continues to rack up sales from leads it amassed at its booth. This is on top of several machines that Safety Speed personnel hung “SOLD” signs on before the show ended.

Among the floor models that Safety Speed sold at the show was the 7400 Vertical Panel Saw,  which incorporates a new and improved scoring system for making chip-free cuts. The newly designed scoring unit allows the operator to quickly adjust for changing substrate thicknesses or to move it out of the way when not in use. The device also lets operators to simply rotate the tooling when needing a sharper edge.

“We were expecting AWFS to be a good show and it was,” Larkin says. “The economy has been good and sales in the western half of the U.S. have been growing. Still, the show beat our expectations for traffic and sales. People who visited our booth were mostly serious about making investments to improve their operations.”

For the record, AWFS Fair organizers say more than 10,500 wood industry professionals registered to attend this year’s show, a 15% increase over registration numbers for the 2013 AWFS Fair.

Safety Speed President Brian Donahue says one of his most memorable and personally gratifying conversations at the show was with a customer who told him, “I have had your 7400 model (vertical panel saw) for over 20 years and it still cuts as straight and square as the first day I received it.”

Larkin says Safety Speed personnel engaged in numerous conversations with woodworkers about its Model 72GP edgebander and its pocket screw machine, which have represented important additions to the company’s product line in recent years.

“As the only American-made glue pot edgebander with top and bottom trim and a price point under $10,000, the 72GP usually draws a crowd,” Larkin says. “We also drew a lot of attention by showing two of our screw pocket machines side by side with one cycling to demonstrate how two motors are moving at once to create the pockets in half the time of the competitor”

Tom Houska, marketing manager, sums up Safety Speed’s winning hand the 2015 AWFS Fair. “It starts with offering high-quality, made-in-America products at very reasonable prices. Our goal is to offer great ways to help our customers streamline their operations and be more productive.”

Rich Christianson is the principal of Richson Media, a Chicago-based communications firm focused on the industrial woodworking sector. Rich is the former long-time editorial director and associate publisher of Woodworking Network. During his 30-year career Rich toured more than 200 woodworking plants throughout North America, Europe and Asia and written extensively on woodworking technology, design and supply trends.

“"You’re not just getting a fine piece of furniture, you’re receiving the personal attention of a passionate craftsm… twitter.com/i/web/status/1…”