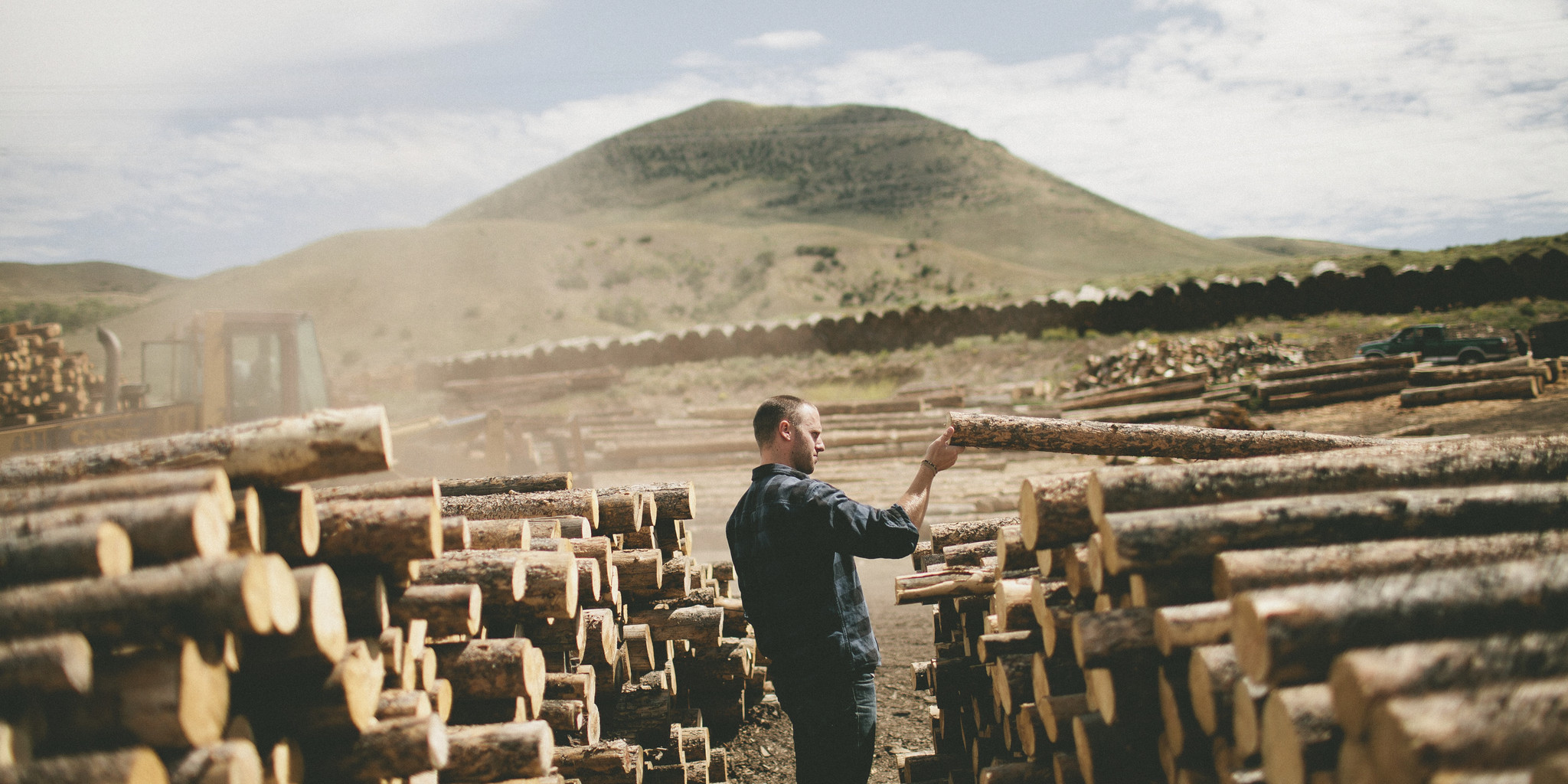 The woodworker who snared the $100,000 top prize in GQ/Kettel One’s 2012 Gentleman’s Call contest for his innovative idea of making “beetle kill pine” furniture also happens to be a satisfied customer of Safety Speed Manufacturing.

Corbin Clay, owner of Azure Furniture in Denver, CO, gives wood milled from dead trees ravaged by the mountain pine beetle a second life. Virtually every stick and board of pine used in Azure’s furniture and specialty items is finish prep sanded on a Safety Speed 3760 widebelt sander, which Clay dubbed a “workhorse” of his four-man shop.

Clay launched his business in 2009 with the express intention of utilizing wood salvaged from the area’s abundant stands of pine trees overrun by the pesky beetle infestation. Adult pine beetles swarm a tree, burrow beneath its bark and spread a blue stain fungus that disrupts the flow of food and water through the tree. Their larvae further impede the travel of nutrients from the needles to the roots. The effected trees essentially starve to death. A tell-tale sign of beetle kill pine wood is the bluish-gray steaks created by the fungus. Clay was inspired to name his furniture company Azure, a rich blue color.

“Our mission from day one has been trying to find some kind of outlet for all of this dead pine,” Clay said. “Early on the market was not really ready for it. So while we would encourage our customers to use beetle kill wood at the same time we needed revenue, if they didn’t want beetle kill we would go with rustic alder, walnut or something else to build it.”

The pine mountain beetle infestation, which the USDA Forest Service says “cannot be stopped,” has created a wide wave of destruction leaving millions of lodgepole pine and ponderosa pine trees dead or dying in its wake. The Forest Service estimates that 3.4 million acres in Colorado alone have been impacted since the outbreak began 20 years ago in Rocky Mountain National Park.

A native of Ohio, who learned woodworking working for a German craftsman in Clearwater, FL, Clay said he was unaware of the pine beetle epidemic when he first moved to Colorado. “I was working for a kitchen and bath company in Boulder. We built a kitchen for this house that had a tongue-and-groove ceiling made with what was obviously pine but had all of these blue streaks on it. I asked the contractor and my boss what the scoop was and they filled me in about beetle kill,” Clay said.

Intrigued, Clay said, “I went home and started Googling thinking for sure that there has got to be a dozen companies doing beetle kill furniture. I was shocked. I didn’t find any makers of furniture or cabinetry using it.” From there Clay conducted an experiment. He made a coffee table and a pair of end tables out of the blighted pine and “lived with them for a year.”

“Early on I thought they might warp or become brittle but they held up fine,” Clay said. ”Then I teamed up with folks at the Forestry Department and Colorado State University. They’ve been studying beetle kill wood for the past 20 years. I worked with them to make sure nothing is harmful. I learned that despite the discoloration the wood is actually no different than regular lodge pole pine.”

Satisfied that the wood posed no health threats, Clay said he tore out a page from “Entrepreneurialism 101” and launched Azure Furniture. He surmised, “If you can identify a void in the market and create a product to fill it you’ll probably do pretty well.”

Rather than attempt to compete with well-established custom cabinetmakers in the area, Clay decided to take a different tack. “I set out with the goal of creating a brand around Scandinavian design, beetle kill furniture. I wanted to position my company as the expert of this. From a business standpoint I wanted to standardize because if you are full custom one week you’re doing turned leg tables and the next week you’re doing a bunch of circles that require a jig for that. Eventually you have to invest a lot of time and money in equipment for something you might use three times a year. It’s also hard to charge full custom. You think it’s going to take you two weeks and then it takes two-and-a-half weeks to finish a piece.

“Over the past five years we’ve been trying to get further and further away from custom entirely for the reason of cash flow,” Clay added. ”That was the whole point of Azure, to create a standardized line of furniture and offer very short lead times at affordable prices.”

Clay said he has learned a number of dos and don’ts working with the pine wood over the last six years or so. “Beetle kill is very difficult to work with,” he said. “Some companies have tried to just shoe horn it into their existing hardwood production process and it generally causes problems to the point that they give up. What’s different for is that our production process is built around beetle kill. It’s the only wood we work with. We know how to handle it and how to dry it properly. We know how to mill it correctly so that it doesn’t warp. That allows us to offer a lifetime guarantee on all of our pieces. Because we have been working with it so long we have developed specialized production processes catering specifically to this.” There are many reasons why Azure Furniture purchased its 3760 widebelt sander in 2013, but Clay does not hesitate to say “the main reason was that it is made in America.”

“Whenever we look at new equipment we start by looking for Made in America,” Clay said. “We’re a small U.S. manufacturing business and we know that cash flow is huge and we know the difficulties and the benefits that go along with it. Safety Speed is not that much different from us. We were looking at the small 36-inch widebelt sander and looked at some other entry level units. The SSM machine is the exact machine that I did my training on in Clearwater, FL. I was already familiar with the machine, the price was right and the Safety Speed Manufacturing team is fantastic to work with.” Clay said his familiarity with the machine shortened the learning curve for finding optimal machining settings to sand beetle kill pine.

“We had to play with the air pressure a little because it is such a high-pitched wood. The belts would clog up a little quicker,” Clay said. “So we turned the air pressure down a bit. It was recommended 80 or 90 psi but we took it down to 60 psi based on recommendation from our reps at Safety Speed and Klingspor Abrasives. “We moved into a new facility this time last year and beefed up our dust collection,” Clay continued. “We’re really happy with the sander. It’s a good machine.”

Clay said his current focus is growing his business, including plans to add a new bedroom furniture collection this year. In addition to residential furniture, Clay would like to grow the commercial and hospitality side of his business. Last year Azure Furniture manufactured furnishings for a hotel and big office project, he said.

“We’re in a good place financially and lucky enough to go on the offense instead of just waiting around for people to come to us,” Clay said.  “We’ll spend a little more on magazine ads, commercials, participate in home shows and trade shows and press our social media partnerships a little harder. We run a pretty low profit margin especially on our wholesale programs so to keep things moving along we have to pick up volume.”

And that means more work for the Safety Speed widebelt sander.

Learn more about Corbin Clay and Azure Furniture at www.azurefurniture.com.

Rich Christianson is the principal of Richson Media, a Chicago-based communications firm focused on the industrial woodworking sector. Rich is the former long-time editorial director and associate publisher of Woodworking Network. During his 30-year career Rich toured more than 200 woodworking plants throughout North America, Europe and Asia and written extensively on woodworking technology, design and supply trends.